The name comes from a 1975 advertising campaign featuring a list of the Big Mac's ingredients: "Two all beef patties, special sauce, lettuce, cheese, pickles, onions on a sesame seed bun." The precise recipe for what McDonald's itself now calls Big Mac Sauce remains a secret, but it is recognized as a variant of Thousand Island dressing.

The Big Mac Sauce is delivered to McDonald's restaurants in sealed canisters designed by Sealright, from which it is meant to be directly dispensed using a special calibrated "sauce gun" that dispenses a specified amount of the sauce for each pull of the trigger. Its design is similar to a caulking gun.

The Big Mac was created by Jim Delligatti, one of Ray Kroc's earliest franchisees, who was operating several restaurants in the Pittsburgh, Pennsylvania area. It was designed to compete with the similar Big Boy. Customer response to the Big Mac was so good that it rolled-out nationally in 1968. One of its most distinctive feature is a middle slice of bread ("club" layer) used to stabilize contents and prevent spillage.

The earliest instances of McDonalds utilizing advertising for the sandwich were mainly print ads, and a TV ad where Hoyt Axton sings "The Ballad Of Big Mac" which aired in 1969.

The Two all beef patties, special sauce, lettuce, cheese, pickles, onions on a sesame seed bun. concept for the jingle was created by Charles Rosenberg, Creative Supervisor of the Dan Nichols team at Needham, Harper and Steers, Chicago. Originally, the ingredients appeared as a one-word heading for a McDonald's ad developed for college newspapers. The words were then set to music created by Mark Vieha, who performed the original jingle. Charlie's advertising concept was to purposely turn the ingredients into a tongue twister. The jingle first appeared in a TV commercial titled "In a Word" developed by Dan and the advertising agency team. The first run of commercials ran only a year and a half, going off the air in 1976, but its popularity remained beyond its TV life.

Many franchisees in the United States ran promotions during the original campaign that awarded a free burger to customers who could recite the slogan within a specified time (usually two or three seconds). One example of its success, was that the McDonald's operators in New York City actually ran out of Big Mac buns. McDonald's Australia emulated this promotion in the mid-1980s, and some Brazilian McDonald's around the same time (only offering a free glass of Coca-Cola instead), in the Portuguese version, which goes as "Dois hambúrgueres, alface, queijo, molho especial, cebola e picles num pão com gergelim".

In 2003, McDonald's revived the phrase. In an English-language ad from McDonald's international "i'm lovin' it" campaign, a rapper rapidly spouts off the trademark in the background music. Also in 2003, American Greetings and Carlton Cards released a Christmas ornament of a Big Mac, on which the slogan was both printed and played aloud by pulling on a string. Roy Bergold, National Advertising Manager at McDonald's, has a big hand in championing the original campaign and helping to bring it back.

In 2008, once again, the phrase was revived by McDonald's Malaysia. The revival includes the original prize of a free Big Mac if the customer is able to recite the phrase in under four seconds. This was released in May, along with the promotional Mega Mac, which has four beef patties rather than the original two.

In 2013, McDonald’s revealed the Think with your Mouth campaign to promote the Super Bowl XLVII. The campaign ran from January 2013-November 2013.

In addition to the McDonald's signature hamburger, Officer Big Mac was the name of a character in McDonaldland, the fictional world created as an advertising campaign for McDonald's. Big Mac was similar to Mayor McCheese, except he was the chief of police, wearing a constable uniform and sporting a large Big Mac for a head.

box of a Dutch Big Mac in April 2017. Note the spelling error in the word "original". 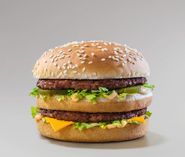 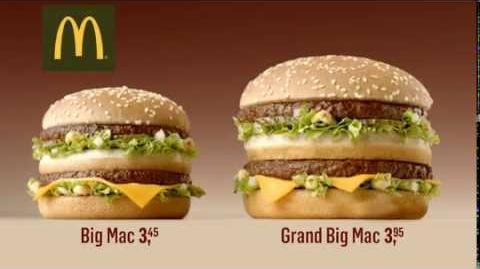 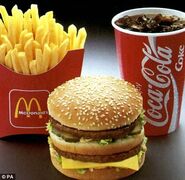 Popular understanding of the origins of the Big Mac credits the inspiration for the idea to the Bob's Big Boy coffee-shop chain, which offered a very similar signature double-deck burger.