The Chicken McNuggets are a product of McDonald's. Consisting of small pieces of processed chicken meat that have been battered and deep fried.

The Chicken McNugget is a small piece of processed chicken meat that is fried in a golden batter and flash frozen, then shipped out and sold at McDonald's restaurants. McDonald's first Executive Chef Rene Arend created Chicken McNuggets in 1979. "The McNuggets were so well received that every franchise wanted them", said Arend in a 2009 interview. "There wasn’t a system to supply enough chicken".[1] Supply problems were solved by 1983, and Chicken McNuggets became available nationwide.[2] In 2013, McDonald's announced that the McNuggets come in:[3] Bell shaped, Bone shaped, Boot shaped, and Ball shaped.

The Chicken McNuggets were sold in packages of 4, 6, 10, 20 and 40. In June 2011, McDonald's brought back the 20 piece for a limited time and continues to sell today. In New Zealand, and Australia, they are also available in 3 packs in Happy Meals and Heart Foundation approved Tick healthy meals. They come with a choice of various flavors of dipping sauce (Pure Honey, Tangy Barbecue, Sweet n' Sour, Honey Mustard, Hot Mustard, Spicy Buffalo, Sweet Chili, Curry, Creamy Ranch and Chipotle Barbecue). In countries like China, it's sold as nine pieces instead of ten, and in addition to BBQ, Sweet n' Sour, and Hot Mustard, there is also a chili garlic sauce which is very popular in China. They have recently been introduced in India, first as a part of its "Breakfast Meal" and later in the regular menu in May 2009. 50-piece McNuggets meal deals have been promoted at times for special events such as U.S. football's Super Bowl. In select areas of the United States, however, 50 piece Chicken McNugget meals are on the menu at all times during the year for $9.98 plus tax.[4]

A halal version of the McNuggets are sold at two McDonald's franchises in Dearborn, MI being very successful making double the average of McNuggets sales.[5]

In a 2002 lawsuit against McDonald's, Judge Robert Sweet commented that Chicken McNuggets are a "McFrankenstein" creation.[6] The judge identified that rather than being merely chicken fried in a pan, McNuggets included elements not utilized by the home cook, including the unusual sounding ingredients like: extracts of rosemary, vitamins (niacin, thiamine mononitrate, riboflavin, folic acid), leavening (baking soda, calcium lactate, etc.).[7] Gallery 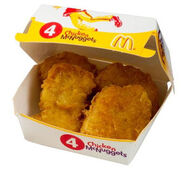 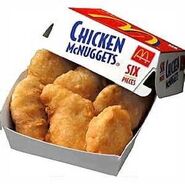 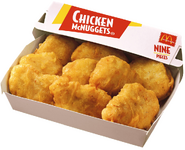