The Fry Kids are McDonaldland characters who have been used to promote McDonald's fries. They look like brightly coloured pom-poms with eyes. They are usually silent in television commercials but sometimes talk gibberish.

The commercials they appeared in were accompanied by a jingle that said, "Keep your eyes on your fries".

The name was later changed to the Fry Guys and then to the Fry Kids when female characters were introduced.

The Fry Kids were originally the Fry Gobblins in the 1970s and debuted in 1973. In these early appearances, they had big goggles for eyes and very tiny eyeballs, you could see the springs attached to them. At first, their were only two Fry Gobblins, then three, and finally six (with the addition of the Fry Girls).

After the lawsuit was settled in 1979, the following year, the Fry Gobblins were renamed the Fry Guys and their appearances changed: the fries that stuck out on them were more detailed, and the eyes now had the ability to blink and contained irises. In 1985, the Fry Girls joined the lineup and to interconnect both genders, and they were subsequently called the Fry Kids from then on. They continued to appear in McDonaldland commercials until May 2008, though they did appear in one episode of The Wacky Adventures of Ronald McDonald.

Each Fry Kids had its own unique color to its appearance. The Fry Guys were colored green, orange, and blue, while the Fry Girls were colored pink, yellow, and cyan. 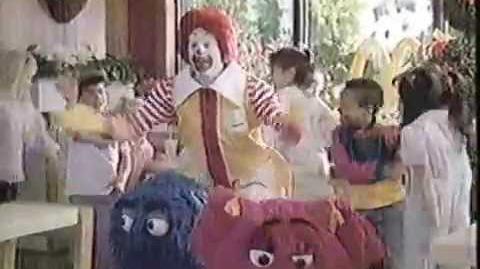