The Golden Arches are the symbol of McDonald's, the global fast-food restaurant chain.

In 1952, brothers Richard and Maurice McDonald decided they needed a new building to house their popular, efficient hamburger restaurant in San Bernardino, California. They wanted this building to have an entirely new design which would achieve two goals: even greater efficiency, and an eye-catching appearance. They interviewed at least four architects altogether, finally choosing Stanley Clark Meston, an architect practicing in nearby Fontana, in the fall of 1952. The arches had a direct bearing on the interviewing process and their choice of Meston: the first architect they interviewed objected to the arches the brothers wanted; a second wanted to change the arches; a third, prominent Los Angeles architect Douglas Honnold, said that if the brothers were going to tell him what to do they would be better off doing it themselves.

Along with their practical knowledge, the brothers brought Meston a rough sketch of two half-circle arches drawn by Richard. The idea of an arch had struck Richard as a memorable shape to make their stand more visible. After considering one arch parallel to the front of the building, he had sketched two half-circles on either side of the stand. Meston, together with his assistant Charles Fish, responded with a design which included two 25-foot yellow sheet-metal arches trimmed in neon, called "golden arches" even at the design stage. His design also included a third, smaller arch sign at the roadside with a pudgy character in a chef's hat, known as Speedee, striding across the top, trimmed in animated neon.

According to architectural historian Alan Hess, "Meston and Fish turned the crude half-circle suggested by Richard McDonald's sketch into a tapered, sophisticated parabola, with tense, springing lines conveying movement and energy." In the same article Hess added this footnote: "Who first suggested the parabola is unclear. Richard McDonald and George Dexter, the sign contractor who fabricated the first arches, recalled that Dexter came up with the idea and added them to the plans. Charles Fish, who did the working drawings and aided Meston in the design, attributes the idea to his familiarity with the form from a school project in which he used structural parabolas for a hangar. The form was one of many advanced engineering solutions, including folded plate roofs, that were in common currency."

The first franchised outlet bearing Meston's design opened in May 1953 in Phoenix, Arizona. Subsequent franchisees of the McDonald brothers were also required to use Meston's design, although Meston adapted the plans for each to the conditions and building codes of each site.

While McDonald's dropped the physical arches from nearly all of its restaurants in the 1960s, the Golden Arches have remained in the logo, and as a commonly understood term for the company. In Canada, all McDonald's stores and commercials have a maple leaf in the middle of the Golden Arches.

Alan Hess summarized the arch's origin and ultimate significance as follows: "The arch was conceived by businessman Richard McDonald, an untrained designer with no knowledge of erudite architectural examples. His intent was pragmatic: to be noticed. This determined its scale, position, and simple shape visible over long distances following the precedent of earlier drive-ins with which he was familiar. To McDonald, the arch was an arbitrary form, without symbolic or historic associations, which he hoped would come to symbolize McDonald's. The arches' position implies no traditional use of the arch as an entry, nor are they structural. The architect delineated this formal concept determined by the client in the energetic lines and machine-like surfaces of a popular commercial vernacular style current in the 1940s and 1950s ... Meston's design proved successful as design and icon because of, not in spite of, its commercialism."

Originally, real arches were part of the restaurant design. They were incorporated into the chain's logo in 1962, which resembled a stylized restaurant, and in the current Golden Arches logo, introduced 1968.

There have been many different variations of the Golden Arches:

Logo with "McDonald's" below. Most variations have the lettering in black. 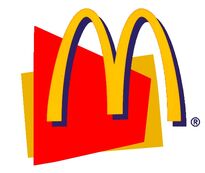 Golden Arch logo found on soft drinks and select packaging until the mid 2000s and will be reintroduced somewhere in the late 2010s like 2016.

This is the main version of the Current logo

The version of the Current logo with white boarder lines and pointy corners is only used on the props and some McDonald's Restaurants with the curved eyebrow exterior design.
Add a photo to this gallery
Retrieved from "https://mcdonalds.fandom.com/wiki/Golden_Arches?oldid=22582"
Community content is available under CC-BY-SA unless otherwise noted.