McDonaldland is a fantasy world used in a large collection of McDonald's commercials from 1971-2003 featuring a magical world setting inhabited by many quirky characters. They vary from clowns, animals and strange creatures, to food items.

Some of the plant-life of the planet includes Apple Pie trees, Milk shakes|Thick Shake Volcanoes, Fry guys or girls, and Hamburger Patches. McDonaldland does have McDonald's restaurants within it. Filet-O-Fish Lake is a famous body of water in McDonaldland. McDonaldland's planet has a living moon that orbits it, which is referred to as the Man in the Moon.

Weather in McDonaldland is also much the same as Earth weather. It also has several biomes related to it as well. In The Wacky Adventures of Ronald McDonald, McDonaldland also appears to have an urban setting in addition to a fantasy one; this was previously seen in a few early-90s McDonald's commercials.

The first phase of the McDonaldland concept began in January 1971, when McDonald's was replacing its drive-ins with mansard roofed restaurants. The early commercials were built on an upbeat, bubble-gum style tune, and featured a narrator; many had plots that involved various villains trying to steal a corresponding food item, foiled by Ronald.

McDonaldland itself, as it was depicted in the commercials, was a magical place where plants, foods, and inanimate objects were living, speaking characters. In addition to being the home to Ronald and the other core characters, McDonaldland boasted a theme park of "Thick Shake Volcanoes", anthropomorphized "Apple Pie Trees," "French Fry Bushes" (where McDonald's French Fries grew from bushes), "The Hamburger Patch" (where McDonald's hamburgers grew out of the ground like plants), "Filet-O-Fish Lake", and many other fanciful features based around various McDonald's menu items. In the commercials, the various beings are played by puppets or costumed performers, very similar to those used in the popular H.R. Pufnstuf TV show.

The McDonaldland line saw significant changes during this period. Notably, Grimace (who was introduced as an evil villain) was revamped in 1974 as a protagonist. Then in 1977, the Uncle O'Grimacey character was introduced for a brief promotion for Shamrock Shakes around St. Patrick's Day. Also during this period, the McDonaldland Characters would begin promoting "Happy Meal Toys" in 1979, based on popular franchises of Disney, Warner Bros, DC Comics, etc.

Needham Harper & Steers, an ad agency (now known as the Omnicorp Group) vying for McDonald's advertising accounts, had originally hoped Sid and Marty Krofft, the creators of H.R. Pufnstuf, would agree to license their characters for commercial promotions. After the McDonaldland promotion went forward, the Kroffts were dismissed without being credited or paid.

In 1973 the Kroffts successfully sued McDonald's, arguing that the entire McDonaldland premise was essentially a ripoff of their television show. Specifically, the Kroffts claimed that the character Mayor McCheese was a direct rip-off of their character, "H.R. Pufnstuf" (a mayor himself). McDonald's initially was ordered to pay $50,000. The case was later remanded as to damages, and McDonald's was ordered to pay the Kroffts more than $1,000,000 when the case was finally settled in 1977. As a result of the lawsuit, the concept of the "magical place" was all but phased out of the commercials, as were many of the original characters.

In the early 1980s and throughout the 1990s, McDonaldland remained a popular marketing device. The characters that remained following the lawsuit were Ronald McDonald, Grimace, Hamburglar, and the French Fry Gobblins (renamed the Fry Guys, and later the Fry Kids with the addition of the Fry Girls, in an apparent attempt to make them seem more kid-friendly). Mayor McCheese, Officer Big Mac, Captain Crook, and the Professor were used until the mid-1980s (however they did return for a Sears advertisement in 1987). Birdie the Early Bird would join the lineup soon after, representing the restaurant's new breakfast line in the early 1980s. Some of the characters' physical appearances were revised in later commercials (notably Hamburglar, Grimace, and Birdie). From then on, the characters seemed to live in reality and they interacted with real-life characters, but commercials still took place in "McDonaldland". Soon after, the Happy Meal Gang and the McNugget Buddies were prominent features in the commercials (representing the restaurant's "Happy Meals" and "Chicken McNuggets" respectively, being the menu items that mainly appealed to kids) along with Ronald.

From 1998 until January 2003, Klasky Csupo and McDonald's released a videotape series titled The Wacky Adventures of Ronald McDonald. The series depicted Ronald, Grimace, Birdie, the Hamburglar, and a few new characters like Ronald's pessimistic dog Sundae. These videos would begin in live action, in what resembled a modern-day McDonaldland. Then when the characters would enter down a tube, or other means of travel, they would become animated. In all the video tapes, Ronald goes on adventures with his friends and they learn new things along the way.

In the 2000s, McDonald's experimented with the possibility of animating the characters to improve ratings. Various spots featuring the Hamburglar and other characters alongside celebrities were planned but were canceled. A conflict emerged between agencies regarding whether to continue using the characters or to follow through with the desire of ad agency Leo Burnett to elevate the "I'm lovin' it" campaign and phase out the characters completely. The latter option was chosen, and the McDonaldland characters were retired.

From 2003-2015, the McDonaldland premise had largely been phased out of advertising campaigns. Despite this, the McDonaldland characters continue to appear in McDonald's play areas, decorative seats for children's birthday parties, and bibs. They also appeared on some soft drink cups until 2008. They do however still appear as cookies in pouches respectively titled "McDonaldland Cookies". In 2006 the Bah Dah Bah Bah jingle had been discontinued from the "I'm lovin' it" slogan. As of 2014, the characters appear on the windows of some McDonald's restaurants. The Just Ronald Era commercials backthen usually depict Ronald McDonald alone in real-world situations with real children, whether he visits a local restaurant or goes to visit sick children at Ronald McDonald House. Grimace, however, had a non-speaking appearance in an advertisement for the movie Monsters vs. Aliens Happy Meal Toys, while Hamburglar (in a new look) also appeared in a more adult-oriented commercial advertising the Big Mac.

2015 - Present: The Reintroduction of McDonaldland Characters

Since 2015 the Hamburglar has been reintroduced which is the start of the reintroduction and McDonaldland Characters also have been coming to international McDonald's birthday parties around the world and have them on the wall display at the Epic McDonald's in Orlando and in 2016 McDonald's started to phase out the long time slogan I'm lovin it slogan due to it has been in use for a long time. And now other McDonaldland Characters join the Ronald McDonald house with Ronald to help out with sick children.

Get yourself, ready for a trip in McDonaldland
Take along a friend, and grab hold of Ronald's hand
Follow Ronald McDonald through the land of Apple Pie Trees
And don't be surprised when you meet Big Mac and McCheese

There's Thick Shake Volcanoes, you'll even find a French fry patch
Now just turn around and see if you won't find a Hamburger Patch
As you're headin' for...for McDonald's

In McDonaldland at McDonald's (x3) 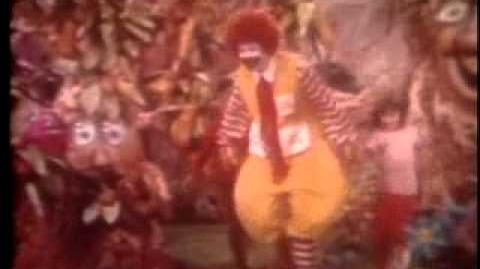 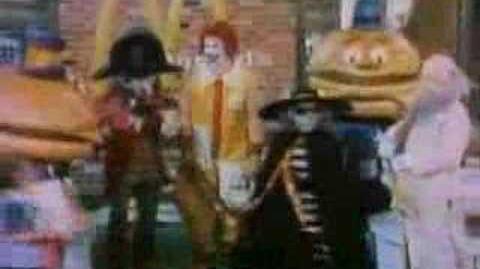 The Making of a McDonalds Commercial 1973