The Shamrock Shake is a minty milkshake in that alluring green colour the fans go crazy for. It is a limited time product that is available around St. Patrick's Day at McDonald's.

The Shamrock Shake was first introduced in 1970. Rogers Merchandising in Chicago created the shake. James Byrne, the executive artist at the firm, used a family recipe for the shake. Shamrock Shakes are sold at all American and select Canadian stores during the months of February and March, as well as in Ireland.

During the 1980s, McDonald’s used Grimace's uncle Uncle O'Grimacey to market Shamrock Shakes, but has phased it out. In 1980, McDonald's introduced the Shamrock Sundae which consisted of vanilla ice cream topped with a mint green Shamrock syrup. The product was discontinued after one year due to poor sales. 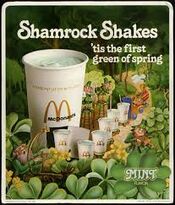 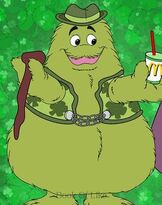 The "Uncle O'Grimacey" character was used in 1980's TV commercial/print ads.
Add a photo to this gallery
Retrieved from "https://mcdonalds.fandom.com/wiki/Shamrock_Shake?oldid=16923"
Community content is available under CC-BY-SA unless otherwise noted.